Before I take you further into the exhibition, I want to give you a little background about what tarot cards mean to my sister and I, who grew up alongside a deck of them. They were our mother’s, and they were soft and well worn. She had a knack for reading them, and her reputation among her friends was that, more often than not, she made accurate predictions while reading the cards. She never read for money, and she never read for strangers. It was a hobby that was rooted in the spiritual and the psychological, and one that caused my sister and I to do some serious deep thinking while growing up. We also learned the ins and outs of every card and the universal symbolism and meanings of each. My favorite was always the Sun.

But all of this begged questions. What was this ability? Was it real? Lucky guesses? What power do the cards have? Do they have any at all? Was it our mom who had an ability, and not the cards? Was she just really good at being in to touch with people? We learned to accept that we would never know the answer to any of these questions, and that was part of the mystique (though, in tune with people? We know the answer to that is a huge YES). Our mom no longer reads tarot cards anymore (though she still has that same deck), but that aspect of growing up had its fair share in developing inquisitive minds for my sister and I. (I should add, I used to try to read the cards, but almost always failed, getting caught up in the literal too much, perhaps. My sister on the other hand seemed to have shared the tarot gene our mom has). It is through this lens of experience that Ady and I moved forward into the gallery to view Jamie Hewlett’s vision of these iconic images. We had already had a chance to investigate L’ Empereur, La Rove du Fortune, Le Maison Dieu, and the unnamed card XIII up close earlier in the day outside Ghost, where the four hung, harbingers of the remaining 18 cards, and couldn’t wait to see the rest.

We poured over them, each one of the Major Arcana as envisioned through the artistic lens of Jamie Hewlett—silly and sinister, thought provoking, demented and giggle inducing, all at once. Ady and I split up and wandered so that we could, at our own pace, investigate the tarot cards, each one paired with a written interpretation in Jamie’s own words, which were every bit a piece of art in their own right. In fact, I enjoyed reading them just as much as I did viewing them. {And fear not, if you weren’t able to make the exhibit, you can happily view all of them up close here via Jamie Hewlett’s The Suggestionists online} 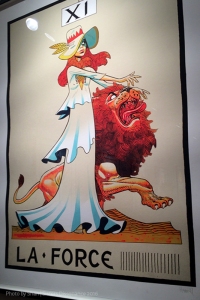 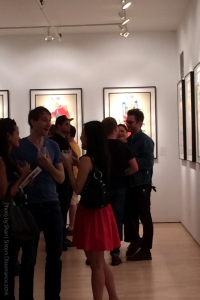 With a buzz of excitement, as we and countless other fans reveled in the exhibit, Jamie finally arrived, and drifted about freely, spending time talking to his visitors. But eventually the crowd grew so dense that a queue necessarily formed to give everyone a chance to say hello.

While this was happening, we continued to finish looking at the cards and I found it interesting that Ady and I were both most drawn to the same image, La Force (aka Strength)—in part because of the gorgeous illustration of a white-gowned woman in a funky hat (I want one like that!) fearlessly leading an insane looking lion like it is nothing more intimidating than a docile lap dog—but also because of its corresponding interpretive description.

Le Soleil once again was one that I was particularly drawn to, though each card was full of beauty and meaning. Together all 22 cards that adorned the walls of the gallery made for a festive backdrop in which fans of Jamie’s and of Gorillaz were able browse with the artist at close hand.

Before we were able to finally get our chance to say hello, about an hour into the reception there was some stirring and word got round that Damon Albarn would be arriving imminently. Ady stayed in line and I went over to investigate. Sure enough, a few moments later, with a warm greeting by some of his friends and musical cohorts gathered at the front of the gallery, Damon walked in, and suddenly the two geniuses behind Gorillaz, possessors of relentless talent, were there united together celebrating Jamie’s art. 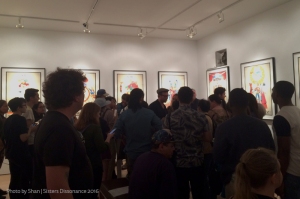 I got back in line with Ady and this is how it went. The line we were in to speak to Jamie was split in two for a brief moment amidst the chaos of the excitement, and then finally the two joined up to meet with fans together. During this time while waiting, Ady made the acquaintance of a talented local artist, Kid Lew, who we chatted with about the exhibit and Gorillaz. We offered to take one another’s photos when the time came. By the time they reached us in line, Jamie went for a much needed break, which left us to chat with Damon Albarn.

Regular readers of Sisters Dissonance and friends and family will know what this means to me. I really wasn’t sure what I would do or say to make a fool of myself (card 0, Le Mat, anyone?), or if I would faint (I didn’t!) if this day ever came. Instead, somehow it managed to turn out to be one of the best comedic moments I could have ever hoped to share in meeting one of my heroes (which did not happen when I was reduced to a babbling idiot when I met Mick Jones).

It was pushing 90 degrees in NYC, and while the gallery was well air conditioned, the amount of bodies and the extreme humidity combined to raise the temperature inside. When Damon reached Ady and I, he spun around to grab a water from the reception table, confiding in us that he was extremely overheated. Ady instinctively started fanning him with her exhibit postcard, and since it provided relief, he grabbed the card so he could keep cooling himself. Ady, being Ady, playfully grabbed it back and we offered to fan him while he signed, and I joined in doing the same. We proceeded to fan him on both sides and as we talked he signed our Blur NYC tickets from last October (click here for an insane moment via Instagram that Ady caught of “Trimm Trabb” during that show!) that thankfully never made it back out of my wallet.

As we fanned more and more dramatically, as the poetic moment dawned on me, I jokingly exclaimed to him, “I am literally your fan!” seizing the opportunity to make a pun while also finally finding the right words to express what I had wanted to be able to express to him without sounding like a giant dork. To this he stopped short what he was doing, turned to look at me with a huge Damon-toothy grin and repeated bemusedly, “You literally are my fan!” then, further encouraging the silliness asked Ady and I, “…can we do the photo like that? Keep doing the fan thing.” Kid Lew was thankfully snapping away for us during this entire exchange, resulting in this:

Jamie by this time returned and resumed his position in line, noting that it was the second time we got bumped from talking to him, but the gallery owner needed to move the line to a different location (it continued to grow as time went on) so she kindly grabbed Ady and I and led us, as she was leading Jamie to a new spot.

Finally! It was our turn. Our conversation with Jamie Hewlett was every bit as fun as the last time we crossed paths with him after the Gorillaz Live on Letterman performance back in October of 2010. As before, he was extremely approachable, witty, and the silliness that bleeds through his artwork is no doubt a genuine reflection of the artist.

Ady and I had talked about how much we both enjoyed reading the written portion of the Tarot exhibit as much as we did viewing the artwork, and we told him this. He seemed very pleased that we had taken notice, saying in all sincerity, “Did you like them? I wrote those,”—as if it were possible that we might not have recognized who the brilliant mind behind them could be!

As a fun side note, while I am sure he probably did not recall meeting us before, I mentioned what he had done to us behind our backs when we had our photo taken with him in 2010 {chronicled here in a prior post, Gorillaz Live On Letterman Odyssey, where we believe we can trace the existence of that thing called the Portal of Fun).

so this is what we ended up with this time.

It was now Kid Lew’s turn to meet the master and Ady took photos while he did, including this photo of his sketchbook which was graced by both Jamie and Damon.

As the evening wound down and it approached closing time, we stopped went around the corner of the gallery into the final segment of the exhibit, Honey, a series of saucy faux vintage 70’s style back lit posters for imaginary soft core films, complete with fake titles (Honey puns!) and credits.

It was truly amazing to spend an evening stepping into the mind of Jamie Hewlett and celebrating his artwork.

At this point, our story continues when our master of fun, Ady, checked her watch and said, it’s 7:40. Without discussion we hightailed outside and into another portal of fun (a taxi cab this time). Within 20 minutes we found ourselves in an entirely different world at an outdoor music festival, heat still pounding and a threat of rain looming in the air. Conor Oberst was on stage with The Felice Brothers at the Northside Festival and we somehow managed to catch the last two songs.

They left the stage and we wandered for a moment, then decided to explore Brooklyn on foot. If the night was not already jam-packed with excitement and a flurry of getting to meet heroes, as we walked outside the festival gates and around the corner, we walked smack into Conor Oberst. I offered to take a photo of Ady with him, and she said to him just as I was about to take the photo, “We missed your set!” To which he replied, “Aw, shit!” Then I snapped. 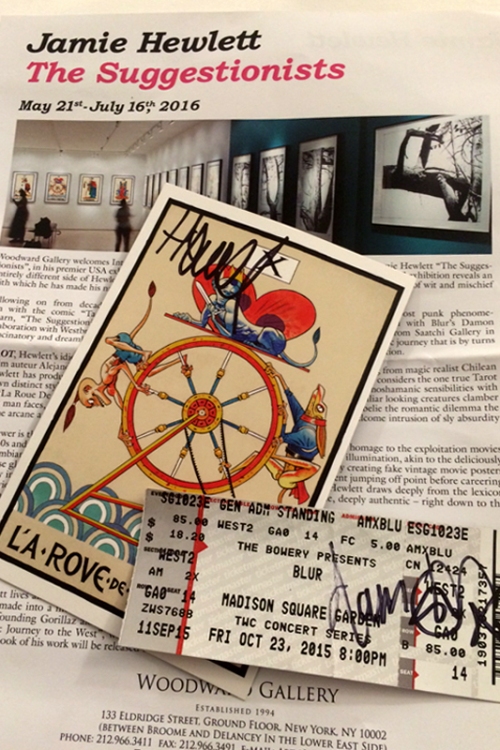 Thank you Woodward Gallery for a wonderful evening and bringing the Suggestionists exhibition to New York City so we could enjoy it and thank you Jamie Hewlett for sharing your talent and creativity with the world. You have a rabid, loyal following and I know we are all waiting eagerly for what is yet to come as we watch hints of Gorillaz 2017 burbling to the surface! 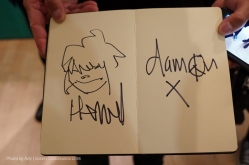 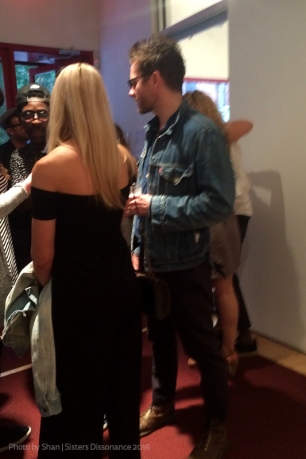 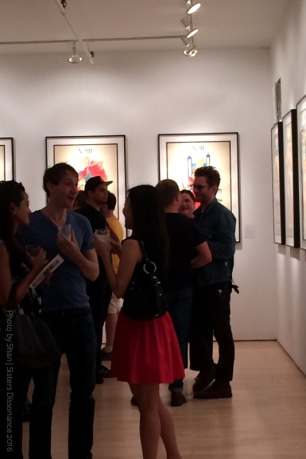 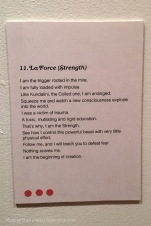 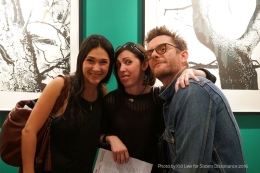 Cooling down before hitting the exhibition! 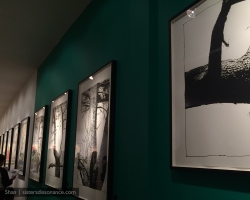 Illustrations from Jamie Hewlett’s Pine series in his Suggestionists exhibition at the Woodward Gallery, NYC