Guest Review by: DSM (Thanks DSM for sharing this with the sis diss)

Twenty-one years is a long time to wait for something. Then again, when you never thought that ‘something’ would ever happen again, the reward for all that delayed gratification can be really sweet. This may be why the patrons in Philly’s TLASaturday night conveyed a restless anticipation before Ride took the stage. People fidgeted, people shifted their weight from one foot to another in nervous rocking, others just kept eyes forward, talking out of the sides of their mouth to one another, as if they didn’t want to avert their eyes and miss the first cue that all that waiting would come to an end.

When Gardener, Bell, Queralt and Colbert walked on stage the rocking quickened, the necks telescoped forwards and upwards, and some began bouncing up and down. With the first note of “Lannoy Point”, the first track from their newest album Weather Diaries released June 16th, it was realized – faces turned toward each other, some smiling at each other with a contented half smile, others with grins stretching ear to ear. It looked like some were giggling with glee.

Ride gathered a loyal following in 1990 with Smile, which consolidated prior EP material, and what is considered their debut album, Nowhere. The highly acclaimed album – Rolling Stone called it a ‘masterpiece’ – placed Ride in good company with The Stone Roses, My Bloody Valentine… But the ride was short-lived. 1992 saw the release of another solid album, Going Blank Again, where the energy and musicianship again blended crisply from track to track. Four years and two diminished albums later, the band broke up. But those first two years left their mark on fans and critics alike.

Weather Diaries may be what could have or should have followed Going Blank Again. Its sounds are more of a refined progression than the band’s releases in ’94 and ’96. This may be the band’s rationale for providing a nice shuffle between 1990 to ’92 discography and their current release in their live set Saturday night. After their opening with “Lannoy Point” and the album’s following track “Charm Assault”, there was a crescendo of shouting and cheering when “Seagull”, the opening track from Nowhere sounded its first notes. For an hour and 45 minutes, the band weaved in and out new and older, with seemingly thoughtful progression through the set list. The set was crisp, the musicianship flawless, and a sonic wall of energy came from a surprisingly minimalist stack of Marshall and Vox amplifiers.

Mark Gardener and Andy Bell smoothly choreographed their harmonic vocals live. There’s no straining here with older voices. They’ve matured – and have said as much in recent interviews –  and looked like they were enjoying it. They intertwined their guitar work seamlessly as well. Loz Colbert’s drumming is a terrific balance of control and speed, again demonstrating an individual well skilled in his playing ability. His articulation of percussion in sound and movement is as fun to watch as it is to hear and feel. Steve Queralt serves up the support that has been evident throughout their recording history — bass lines that balance out the weaving  reverb of guitars, with just the right amount of intricacy sometimes to play a part in the weaving. From all four, studio session playing quality, with just the right amount of energy and variance from the studio tracks that you were undoubtedly listening live. They took “Drive Blind” and wonderfully embellished it past the seven-minute mark.

And that’s the key for my tastes in live performances from bands and music like this. Match the integrity of the studio production as much as possible, while serving up the energy and variance to remind us we’re live. As an endnote, a note about the night’s end. The encore concluded with the superb wall of sound from “Leave Them All Behind”, and as Colbert remained, he pulled out his phone and took a shot of the crowd. That should be a nice ending, but the crowd remained. The stomping and shouting had an even pace, and maybe that’s why it kept going minutes until the crew brought equipment back out, the four emerged, and gave us wonderful renditions of “Dreams Burn Down” and finally “Chelsea Girl”. Gardener graciously told us that was really a wrap, and Colbert saw fit to take another picture.

End notes after endnote… Tomorrow night is their D.C. show, and then they depart for the U.K. and a quick stop in Japan. They’ll be back to the U.S. on September 20th. And, if you have a notion to take a run and hope to ‘run’ into the band, Steve Q and Loz apparently like to take a jog, as they did in Philly this very morning.

Last evening I had the experience of seeing The Internet live at the TLA in Philly. A review is forthcoming. Until that time you can see the photoset by clicking HERE. 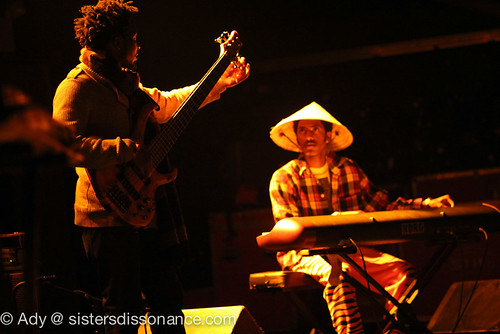