There’s no place like home, but there’s also no place like Jim Thorpe, Pennsylvania either, especially if the Felice Brothers are in town. For the third year in a row, Ady and I made the voyage to one of the most picturesque, magical and slightly surreal towns we have ever encountered. We almost didn’t make it, but the draw of the Felice Brothers playing there again was too much to resist so we packed up and headed out—me making the multi-hour venture across interstate 80 (aka I-Ady) and she traveling from Philadelphia—to meet up there. Almost exactly six hours from my departure time I rounded the bend of Rt 209 and was swallowed up by the mystic mountainsides and deposited directly into the heart of the oldtimey town populated with antique-lace-curtain adorned brick buildings, scrolling ironwork and people who know how to have fun. 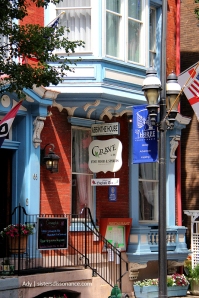 I navigated to the beautiful Inn at Jim Thorpe and upon entering our room a familiar hand appeared from behind the door and an emerald green drink, the first of two types on this trip, was foisted upon me. This one was Ady’s green smoothie concoction (non-alcoholic, and YUM!). Fully re-energized by this and our little smorgasbord of road food (our specialty) we headed out in search of the second green drink (alcohol-laden), which is found at Crave, a now pre-show-requisite stop.

Eventually we made our way into the casual party atmosphere of Mauch Chunk Opera House and the Felice Brothers took the stage to an audience rearing to go. James, now a veteran of that stage, welcomed everyone—family and friends, residents and visitors alike—before launching into a short but very sweet set. I have been following the tour through other people’s observations and knew they have been testing out and perfecting new material. By choice I have avoided hearing anything as I wanted a new surprise to my ears when I saw them live again. I am so glad I did! The new tunes flowed and gelled perfectly with the rest of their material and the next album is even more eagerly anticipated!

Highlights of the night included possibly the most powerful version of “I Got What I Need” we’ve heard from James yet (James quickly cast his microphone aside and filled the Opera House with sound au naturel…magnificent); a rip-roaring version of “Penn Station”; Ian taking center stage for a gorgeous solo “Mating of the Doves”; opener “Little Anne”; “Lincoln Continental”! . . . I also remember thinking to myself that in general the quality of vocals—both leads and harmony amongst the band in various configurations—sounded incredibly rehearsed, precise and quite simply fantastic all the way around (this thought was sparked by one song in particular that caused me to notice, however in an unfortunate memory lapse, thanks green fairy, I cannot remember which).

Once again the magic combo of FB’s + JT resulted in the perfect adventure for Ady and I. We capped off the evening with some post show pizza on the porch and a crazy little night jog through the town under the almost Super Moon.

Photos from the show will be added to our flickr account, for now here’s a nice representation to keep everyone happy. I have also included a photograph of the “Weak Danger Man” set list that a gentleman grabbed (thank you for sharing!), I asked to quickly take a photo (apologies for the low quality, I have adjusted the photo a bit to make it a little more readable). 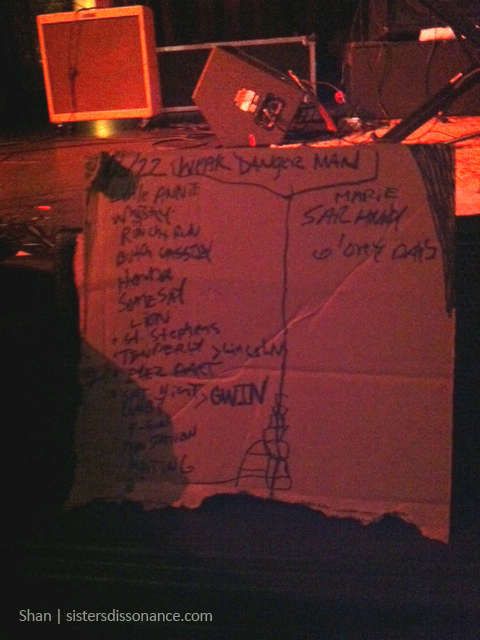 {PS – Cheers to Meghan and Amy for adding to the fun, was so great to see you there!}

{PPS – We missed you Kristi and Cindy!} 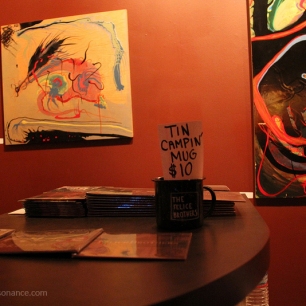 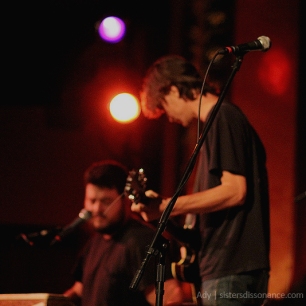 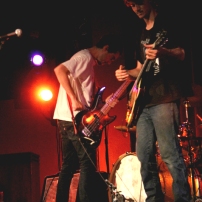 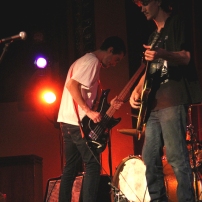 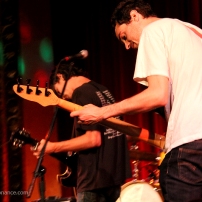 I think I speak for both Ady and I when I say that Jim Thorpe, PA has solidly planted itself at the top of our list of favorite towns to visit together. We were there the for the first time last year when the Brothers blew into town and played the Mauch Chunk Opera House, and we were quickly taken in by the old world charm oozing from its every nook and cranny. The town’s residents welcome their visitors warmly, and when the Felice Brothers arrive it’s as if there is a conspiracy of fun erupting—doors propped open and residents standing at their doorsteps to say hello, music players set on the porch blasting Felice Brothers albums, posters announcing their arrival plastered on every flat surface available—turning the town into one giant welcome party.

We had such a great time during our first visit that I was inspired to work on the illustration Two Sisters and a Tavern when we returned home. After spending many hours working on the illustration back then, I found it disorienting and surreal to be walking around Jim Thorpe once again. The illustration, a semi fact/semi fictitious geographical mash up of places and events, consumed me and became so vivid in my mind during its creation that when I stepped out onto the streets from our hotel room, it seemed that buildings had become displaced (“That shop/bar/tree should not be there! Should it?”). 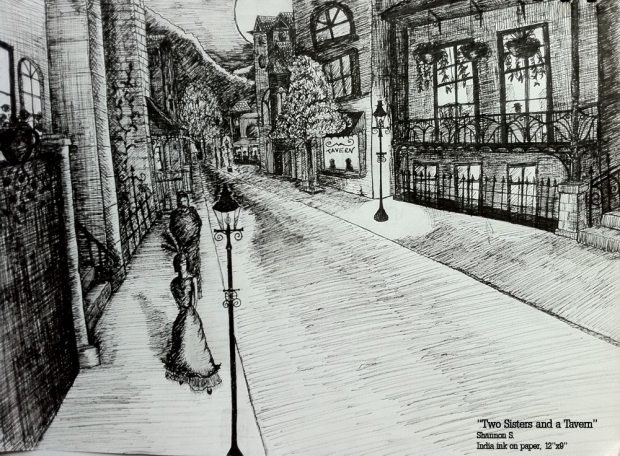 After my own personal wave of bewildered nostalgia subsided, we headed out and about prepared for our Jim Thorpe adventures that awaited. We traveled there (almost exactly a year later from last year’s show, and this year, no tire blow out!) for the 2012 return with two wonderful friends, Cindy and Kristi, with much anticipation and excitement. We knew (rightly so) that the town would once again turn into the veritable Felice Brothers cheering squad. We tooled around the main drag for several hours before the show before finally tucking into Crave Fine Food & Spirits, a little gem of a tea house/restaurant that also serves spirits and other beverage delights, before we set out to the show, the pinnacle of our trip that involved four friends/two sisters plotting our convergence on a single ultimate destination—Kristi (author of Not That Kind of Groupie) traveling from Dolores, Colorado, Cindy from Brighton, Michigan and me from Cleveland, Ohio to meet up with my sis, Ady, traveling up from Philadelphia, Pennsylvania. It was the perfect trip and reaffirmed what Ady and I knew: Jim Thorpe and the Mauch Chunk Opera House is the best place to see a show—especially when it is the Felice Brothers.

It was everything I had hoped the trip would be, great company traveling to and from, a fun day on the town followed by a fantastic show from the Felice Brothers, who also sung praises for Jim Thorpe and were visibly charged by the audience’s exuberance. A single math equation to sum it all up: Jim Thorpe + The Felice Brothers (@Mauch Chunk) = THE magic combination.

(A little shout out to Meghan and Amy, who we ran into again, always nice to say hello to new friends!)

Inspired by a walk we took through town while exploring on a recent trip to Jim Thorpe, Pennsylvania, on a Two Sisters sojourn to see The Felice Brothers (we now arrive toting Ady’s new camera and my sketchbook to document our trips together), this is the completed version of the drawing that I’ve been working on for the past several weeks. It’s a bit of a mash up of the architecture and building placement in town, so it is not geographically accurate. Nor did I see the ghost of Nomadi roaming the streets, but I did imagine it. The illustration started as a pencil drawing and moved to india ink pen for this final image.