You know one of those nights where you almost didn’t do something, and then you’re very glad you did?

Long standing plans had me penciled in and heading to the Trocadero to see The Felice Brothers and Josh Ritter, an unexpected yet welcome combination of good and fun. The past FB show in Delaware I was unable to go to, so I made a point to get to the Troc to see their set. Glad I did– did I say that? After taking some pictures- and I was laughing to myself because I think I confused the other photographer because I was trying to “multitask photograph” (dance and shoot simultaneously- not easy, but I did it). I think I need to invent a word for dance photographing, because I do this often.

And as usual, there is no lens to catch Farley because he moves WAY too fast. Even when he thinks he isn’t moving (I suspect). You can see the full show photo set here.

Looking forward to the shows this summer, and more new music by the Bros. Our Newport Folk Fest countdown is on!

We have a guest post from Arden Gild Hall. I was unfortunately not able to attend. In my absence we have a guest haiku and photos from Sisters Dissonance friends Meghan and Amy! 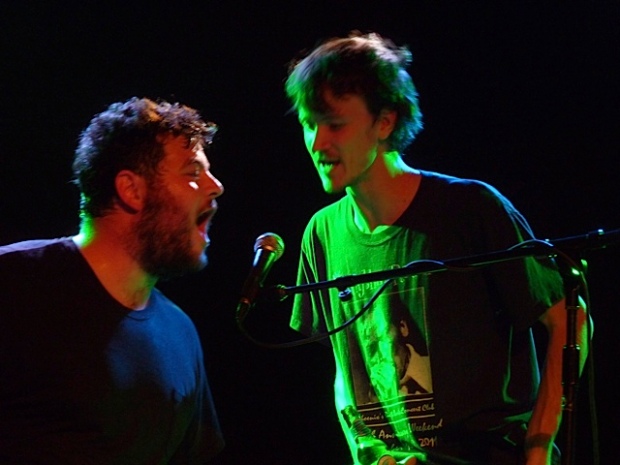 For today I’ve uploaded “Goddamn You, Jim” a seemingly impromptu performance during which time bassist Xmas was repairing his bass . . . haunting and lovely:

another video from the Two Sisters ever-growing vaults…this time taken by me this past weekend in Rochester, New York. The other half of Two Sisters couldn’t make it, nor could another dear member of our posse, but as it would happen at the last moment, yet another longtime-should-be-another-sister friend was able to go with me on the fly and supported my need to be at this show. Turns out it was quite a show to be at for many reasons, one of which includes being there to see the last moments of the existence of Ian Felice’s beautiful Guild guitar during “River Jordan” at the end of the show…honestly the most emotionally charged, heart wrenching performance I’ve ever been witness to. I’ll be sharing some of my photos and video and some words about the (somewhat controversial) show with another site, Frankiesgun.com as well sometime within the week.