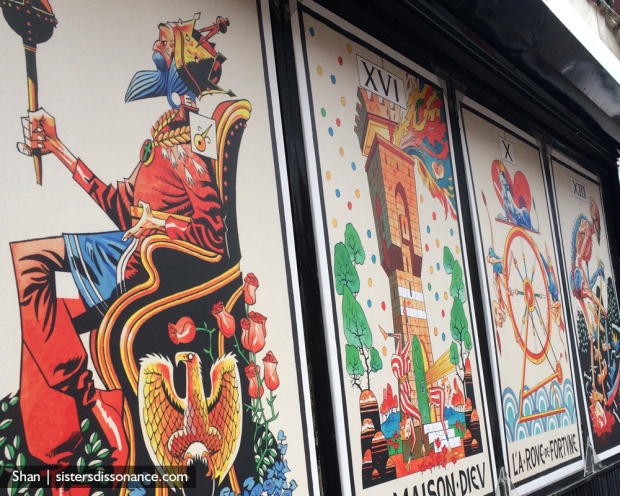 Images from the Tarot series in Jamie Hewlett’s Suggestionists exhibition, displayed outside Ghost, across the street from the Woodward Gallery, NYC

By Shan
Photos by Ady and Shan

My sister has a super power (actually two, but we will focus on this one). She has the incredible ability to roll with things, so much so that she miraculously, and very often, coaxes the Portal of Fun to open way more than it probably intends to (The Portal of Fun, something we discovered together when Sisters Dissonance came into existence, is a very real thing, and it’s there if you know where to look!).

For this outting, there was a bit more jockeying of plans and things left to chance than we normally encounter, including where to stay (giving up an originally booked hotel for one chosen by Hotwire, a spin of the wheel gamble encouraged by Ady . . . point #1 in coaxing the portal of fun to crack open), and even a false start during our journey into the city. when she had taken a wrong turn on the highway, a route she knows well, she mused why in the world she she could have done that. “Who knows what disaster we may have missed by delaying us,” she had said when she realized her mistake.

Earlier this year, Ady had purchased tickets for the Northside Festival in Brooklyn, and initially I wasn’t going to be able to join her. She was looking forward to it very much as a way to kick off her summer, and after time went by I realized there was no way in the world I would miss being there with her. I made some shifts in my schedule late in the game so that I could be, and our adventure awaited.

About a week prior to our trip, I came across the exciting news that the Jamie Hewlett (Gorillaz co-founder and artist/creator of Tank Girl and one of my favorite artists) art exhibition, The Suggestionists, would be opening at the Woodward Gallery in New York City. That very same weekend we were planning to be there. What Fortune!

This initiated the hotel move that made logistical sense for us to be nearer to the exhibit, so that we had time to drop in the gallery and take in the art for a couple hours, before making our way into Brooklyn later that same evening. What fun!

One day prior to our arrival, I learned with even more excitement that not only was the exhibit opening, but that there would be a reception at the gallery with the artist on the day we arrived in the city. What Fortune again! I thought as I read the news. I read on. Time of reception: 6 to 8pm. Time of show in Brooklyn: 7pm. A piece of my heart sank when I realized the conflict, but I was there to be at the festival which Ady had originally planned, and which I was also looking forward to.

So, torn, we resolved to do a bit of both and check out the exhibit around 3 to make time to get to McCarren Park. I was still elated to be able to see the works of Jamie Hewlett in person that I had only had glimpses of through photos from the exhibit when it was showing in London.

After checking in to our hotel, a very nice spot (our Hotwire gamble was a big win, scoring a room at the Indigo in the LES, one that was adorned with a very fitting piece of artwork that agreed with our mantra, proclaiming “FUN Gallery!”), we were on our merry way to see one of our favorite artists in a city we both have grown to love so much. I was as excited for this as much as any concert I have counted the days down for. We hoofed it down the scorching three blocks—a piercing 87 degree day with no breeze or clouds in sight to take off the edge—eager to see the artwork awaiting.

When we reached the front doors of the Woodward Gallery, an unassuming frontage on Eldridge Street, the doors were sealed shut. Shoot! I had checked the hours, I had thought, how did I not foresee this? A bit disappointed, we walked across the narrow street to look at the four massive, colorful Hewlett Tarot card prints that were displayed on the exterior wall of Ghost, the bar also owned by the Woodward Gallery, to at least get a peek at what was contained inside the gallery. I would be returning  here tomorrow before we headed home to see the rest, I assured myself, and so we were both content, swept up in a moment of awe looking at the crazy wonderful artwork that lay before us. We then walked back over to the gallery to pick up a couple postcards from the exhibit to tide us over.

As fate would have it, the owner of the gallery happened to be coming in from across the street, and he noticed us trying the door one last time and taking the postcards. “The gallery will open back up at 6 for a reception with Jamie Hewlett!” he said happily, encouraging us to be there. “Damon Albarn will be here, too.”

As a believer in going with the flow and allowing things to happen, Ady is truly a master of fun with an ability to completely change her plans when something just seems right and like it should be happening. She doesn’t flinch when making snap decisions, and in that moment, Ady firmly pushed that damn Portal open. “I’ll just need to find a better pair of shoes to wear at the reception,” was all she said walking back toward our hotel, letting me know that in

Cooling down before hitting the exhibition!

that moment she was giving up her initial plans, plans she made months and months ago and looked forward to, so that we could be there for this event. It also seemed that my sister, in making her wrong turn earlier in the day, had not caused us to miss anything with the delay, but rather, inadvertently put us right in the path of what was most certainly point #2 on the road to the Portal of Fun.

In the end we wandered aimlessly, dazed by the heat and humidity looking for shoes, but soon realized  what we really needed was to just change clothes into what we already had, and go gaze out over the sunlit city from the rooftop bar at our hotel, and grab a drink down the street.

At 6:05 pm we finished our drinks (a refreshing handmade watermelon margarita for me) and back down to Eldridge Street. This time the door to Woodward Gallery was not closed (“the Portal is now open!” it almost seemed to say), revealing a brightly lit, festive gallery filled with an eager and excited crowd of people already gathered to see what wonders awaited us.

As we entered and two friendly gallery workers welcomed us in, we made our way up the steps and the first piece of “The Pines” (one of the trio of installations in the Suggestionists exhibit) came into view. The rest of the series lay beyond further in the gallery, set against a vibrant green backdrop, showcasing the beautiful illustrations of pine trees from the south of France. I marveled how even though these were stark black and white line drawings of pines, seemingly fairly removed from his colorful work for Gorillaz, one could tell with ease that they were forged from the very same hand. The line work is distinctly Hewlettian—beautiful in its simplicity, elegant, bold, and yet still conveying that overriding sense of playful menace that is typically present in the rest of his artwork. 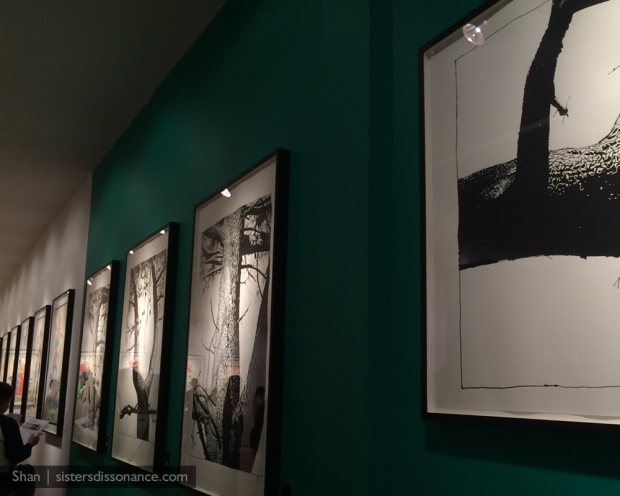 Illustrations from Jamie Hewlett’s Pine series in his Suggestionists exhibition at the Woodward Gallery, NYC

We poured over each of the illustrations, then turned our eyes to the Tarot section.