Emily Wells is one of those people who inherently possesses a larger-than-life presence. Even when quietly slipping into the corners of the Beachland Tavern to catch a bit of her opening act this magnetism is apparent.

I first saw Wells perform in the fall of 2009 when Ady and I traveled to NYC to catch a show where she opened for Joseph Arthur at City Winery. It was the first we had heard of her, but within minutes of her taking the stage, the audience was transfixed.

The same occurred last Sunday night (5-5-2013) at the Beachland. Wells took the stage and began by telling her cozy and obviously very dedicated audience the answer to “why did she decide to come to the Midwest?” was “for each one of you.” She opened her set with deceptive tranquility, something akin to the maneuverings of a snake charmer, quickly hypnotizing the crowd into forming a tight semi-circle around the stage as she built her songs layer-upon-layer, looping her voice, a violin, synthesizer and melodica. And, just to be sure there wasn’t a stray person that was not fully engrossed, she commanded full attention by suddenly introducing a thundering tribal drum beat.

As the evening went on she slid easily from genre to genre—gospel; an “impersonation of [herself] doing trance;” the southern spiritual-esque “Mama’s Gonna Give you Love” from her most recent album, Mama; an acoustic cover of one of her own songs that will appear on her “recently and accidentally recorded” spinoff album Mama Acoustic Versions (during which she donned a cowboy hat and a fake twang with a smile, adding that she sometimes likes to roll into town like that for self-entertainment); the violin-hip hop stylings of her 2008 album Symphonies —in the same slick way as she transitioned from instrument to instrument.

As a performer one gets the sense that, eyes closed and arms outstretched, Wells is singing to no one, to herself, to the skies, and to each and every person in the audience, all at the same time, adding an even greater emotional depth to her music. Live, she takes her vast catalogue of recordings to another, heightened level revealing the full scope of her genius talent.

Her tour continues into August 2013. 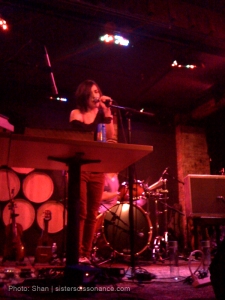