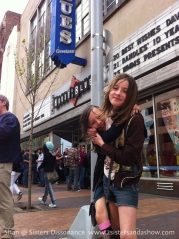 The scene downtown last Sunday was vibrant and buzzing in anticipation of the Red Hot Chili Peppers playing their free show in support of the Obama campaign. T’was a family affair as I attended with family and loved ones, including Ella and Ava (pictured, at their very first big concert experience). We all were treated to box seats thanks to a very generous friend, so the vantage point of the stage and show was free and clear and resulted in a few photos and a great video —admittedly slightly imperfect audio due to proximity to amps—of second song “Dani California” from the short and sweet 6 song (plus encore) set.

The energy level at the early hour of 1 o’clock in the afternoon (a disorienting time to be in full live show mode but I liked it) was as high, if not higher than any other Chili Peppers shows I’ve been to. And I walked away once again wishing that bottled essence of Flea-energy Juice was on the market. (Speaking of, Rocket Juice, anyone?)

Thanks to the mind behind Offmyeffingmeds who was in our entourage and took over review duties for the day (check his hilarious no holds barred social commentary blog and twitter account, I command you!).

Catching the Red Hot Chili Peppers yesterday at the House of Blues was just too fucking cool! You’d have difficulty imagining a better way to spend Julian Easter. (I’m thinking Jesus would actually have to show up for the party.)

Anyway, warm temperatures and the early-afternoon performance only fed the surrealistic atmosphere. We got an invitation at 10:30 am, while we were still abed. The ensuing explosion of activity probably damaged the last (very small) shred of sanity our cat possessed.

We were presentable and out of the house soon thereafter, cursing drivers who had apparently received instructions to use any means necessary to delay us. Nobody drove no more than 15 mph below the speed limit. Their efforts failed, though. We reached downtown Cleveland in plenty of time to join the party on Euclid Avenue.

1,200 Obama workers had worked for free tickets to the show. All of them turned up.

After running a couple videos that highlighted the President’s achievements, his national campaign manager introduced the band, and urged the audience to consider why a world-class outfit like RHCP would sacrifice time and sleep to help inject political volunteers with a bit of energy. (You should do the same.)

The House of Blues is not a concert venue…it’s a large saloon. Being locked down in a room of that size with the Chilis is like Talking Heads’ “Heaven,” without the irony. It’s perfect. The band jumped into ”Can’t Stop” and didn’t waste a second of the next 45 minutes. Energy was not a problem. 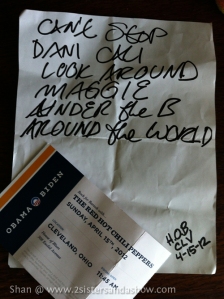 Chad Smith is simply an amazing drummer, both visually and aurally, and tossed at minimum a dozen sticks to the fans and no one worried about losing an eye. Josh Klinghoffer seems to have been bred to play guitar for the band. He’s got the swag and the chops cold…and merits at least a 9.2 for floor exercises! Flea and Anthony, the over-amped heart of the Chilis, did what they always do: brought the funk and never let up.

“Dani Cali,” “Look Around,” and “Rain Dance Maggie,” followed and then everybody caught their breath during “Under the Bridge.” Two more songs and it was over.

We felt the longing of Mother Teresa: God spoke to her once at an early age and then abandoned her for the rest of her life. Leaving her with one powerful hunger.

Thanks once again to everyone who got us there!