Conor Oberst said once “Victory is sweet even deep in the cheap seats.” This I believe is true—but even sweeter in the front row, two nights in a row.

March 9, 2011 at Radio City Music Hall:  we were slated to see the second of the two in a row for Bright Eyes. We were fortunate enough to snag a set of third row pit seats for this event! How lucky is that!

Wild Flag opened, followed by Superchunk. Both put on a fantastic show and got everyone ready for the following 2-hour emotional, rockin’, and memorable event that Bright Eyes rolled out for everyone. Really, the energy started as soon as the lights went down. Everyone out of their seats- Now that’s what I like to see. I hate a seated concert just as much as I hate the dentist.

At about the third song or so, I wiggled myself into an empty seat in the front left row. I watched this wonderful seat stand empty for about 15-20 minutes and couldn’t take it anymore. I asked the usher if I could have it. She was kind enough to allow me.   Great! Now I was settled. I did leave my sister behind until encore, but I did what I had to do, and I’m almost certain she understood [ed: of course she did!]. Never before (until March 8) had I seen a Bright Eyes show.

Normally at shows I take loads of video and photos. I was only able to capture some shots with my iphone and a few quick snips of video. I was much more into taking in the music, the whole experience without a lens in front of my face, not my usual concert experience, but it just felt different. I left Shannon with the task this time. She did a fantastic job! I’m not sure if a camera can capture emotion or energy fully. But, it’s evident that this isn’t a rote stage act with no personality. I hope you enjoy looking at all the shots we took.

So much can happen in two hours. There were broken amps, broken guitars, classic comments from Oberst like “I don’t know who made this setlist, it’s gross.” (which I’m still quoting because I think it’s so funny) after he commented on the sexually explicit lyrics in “Take It Easy” that was followed by “Hot Knives,” and a very wild and crazy Conor in the second row center screaming “I’m WIDE AWAKE IT’S MORNING” at a bunch of enamored fans as the lights flashed and music played (you all know what he says guys prior to screaming this!)  I was lucky enough to catch a few seconds of this with my iphone, knowing I couldn’t get over there fast enough to join the madness (without risk of losing my first row spot I had so luckily secured) and it was awesome to actually get to see that live for the first time.  But man was I wowed at the lung capacity. It must have taken years to be able to do that! Impressed.

We were lucky enough to get a complete “Ladder Song.” It was great, and I’m so lucky I got to hear it. I have read reviews of other shows and it hadn’t shown up much on set lists. Totally a bonus for us. Okay, so back to where I was…

When I first heard “The People’s Key” it wasn’t a stand out song for me. I liked it, but it wasn’t my favorite. But sang and played with emotion live, I finally got it and I loved it! After “Road to Joy” ended they closed with “One for me, One for you…” where Conor gets personal with those in the front row, and it’s the highlight. I’ve read a few reviews that say “lots of people won’t be washing their hands tonight” – I wonder how true this is.

Oh, and did I mention that that very night additional shows were announced? I mean, what are the chances that what I thought was the night of my LAST Bright Eyes show of the tour I would find out that they are coming to MY town, and one close enough to my sister that we can go and a friend of ours can meet us there! Two more shows in June now? I can’t believe I get to start my count down over. And never forget the edgy feeling at the 10am presale! It’s a Bright Eyes kinda spring! I hope you are all enjoying the shows that are making their way to you, and we’d love to hear about them. Bright Eyes March 9 at Radio City Music Hall, definitely in my top 2 shows of all time. Can I say I LOVE NY without risk of sounding cliché? Oops, o’well, I just did!

Into the pit
While Adrienne was holding down the fort at her seat, I was able to snap a few photos of Conor Oberst heading into the center pit, just to the right . . . 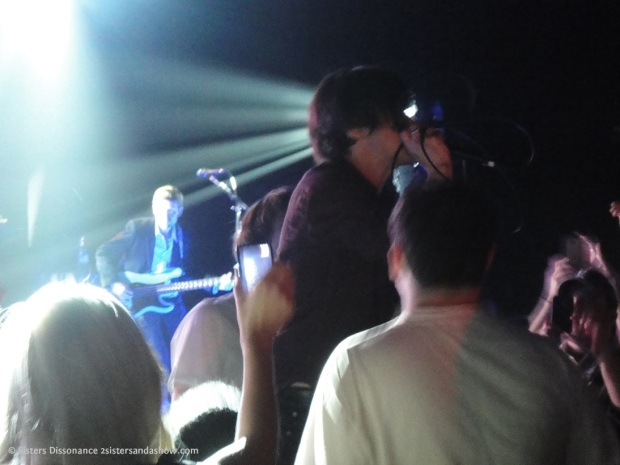 . . . while Ady captured a few seconds of this on video

The rest of the photo set from both nights at Radio City Music Hall can be found here.

Opening bands were both fantastic, we stuck around for full sets from each of them.