Drunken Balordi, “666 (Drink Up)” live at the Forum, Kentish Town

Interview by Shan
This interview first appeared on Mental Beans on May 21, 2010

Despite many odds—broken computers, hangovers, flu viruses and the like from both sides of the conversation, which caused a slight delay getting this together—I’m happy to finally be sitting here about to make this post.

Speaking as a musical head, one who is chronically listening to and seeking out great music that is, I made another jaunt through the mighty Strummerville Foundation for New Music’s DIY section a little while back, and this time around Drunken Balordi caught my attention. I gave a listen to the song posted there and immediately sought out more by them. I came across a great video clip that I wanted to use as Song of the Day, but not knowing the title, I got in touch with lead singer/guitarist Billy King, thanks to some loose connections, to inquire about the name of the song. That lead to an all out interview that I’m pleased to share with you now. So as promised . . . here’s Billy.

It says on your bio that Drunken Balordi are from London. What area, and are all members from there originally?

Yeah well we are Brixton based, we are quite an eclectic mix. I am originally from Ireland & lived in Italy for 7 years before moving to Brixton, Justin is from South Africa, David is from Italy, and Topper is from New Zealand.

How did the band come together initially, and who came up with the name?

The band came together when I saw the film ‘Everything is Illuminated’ and I liked the soundtrack so much, I decided to form a band based on that eastern European music and mix it with punk. I put an advertisement on Gumtree and a guy from Germany replied to it, came over for an audition, I played him some of my songs and he liked them and that was the start of Drunken Balordi. That was about two years ago now…and we have gone through a few band members who could not commit etc…or got burnt out from all the party’s we play! (Laughs)When I lived in Italy in 2000 for 7 years I played in various punk bands and basically partying my ass off, there used to be a great punk scene in Bologna and I played in a band called Thee Boozers, made many friends and fans. The name ‘Drunken Balordi ‘ came to be basically … one summers night myself and some Italian punks were sitting in a street drinking and talking about music, politics and what not, when along came another friend and he shouted out ‘Hey, I soliti drunken balordi!’, which means ‘hey, it’s the usual drunken fools’! ha ha ha. So at that moment I thought ‘mmm, that would make a great name for a band’. I forgot about it until one day while walking down Brixton hill when I remembered the name and said ok I’ll use it for this new music project that I was cooking up.

Gogol Bordello, The Clash, gypsy punk, Balkan, klezmir and folk were some names/descriptions I came across several times while reading about the band, and I can hear the influences for sure. But besides that, there’s so much more that makes Druken Balordi, Drunken Balordi. If I were an alien from another planet (and I’m not, I’m just pretending, just so you know), what would you say to describe the essence of Drunken Balordi, outside a stylistic description or references to other bands?

What makes Drunken Balordi, Drunken Balordi is that when people come to our shows most people cannot help but get involved in the ruckus and madness of the music, it really pulls them in and makes them happy and dance and go a little crazy! And after the show, we really like to party off stage just as much as when we are on stage. There are no big egos here in this band just four normal people, who have a passion for music and have ferocious appetites for partying.

What is the creative dynamic within the group like? Is there a principal songwriter or do you work as a unit on each song? How do you approach building a song? (I’m always interested in this as it relates or doesn’t relate to how a canvas is approached).

I am the principle song writer 90%, I come up with a song or story and put down with a rough draft of music, bring it down to the boys and they put their musical expertise over it and smooth it out in the studio etc. As I am the singer too, it’s 99% my lyrics, I am very critical of myself and generally only write about my experiences or how I see things through my eyes so its convincing when I sing our songs ..I think that is a very strong point to our music,..is that its not bullshit, its real!

What do you tend to do if you hit a creative road block?

Ha ha ha ..I only hit creative block when I am not happy or have issues going on. I’m generally a very happy person and content with my lot…I do know what side my bread is buttered on. But what I usually do is go out and try and meet as many new and interesting people as possible and party and dance my demons away. It usually works too.

Do you play any other instruments besides guitar? What about the rest of the band? 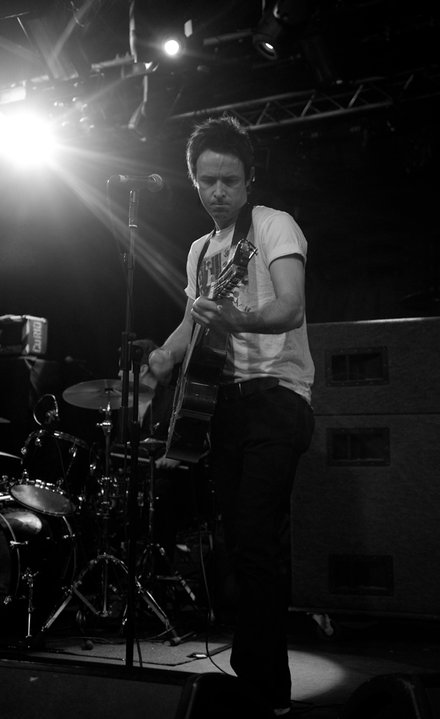 The rest of the band …they are pretty talented…they can play quite a lot of instruments. Me, guitar and the Banjo which I actually play on our Debut album self titled ‘Drunken Balordi’ that we are about to have a physical launch party next week at Project Orange in Brixton, this is one of the first venues we played & we are going back for one huge party to thank all the fans that have been coming to our shows for the last 2 years.

What music are you listening to these days?

Oh god ..the list is endless, where do I start?
Well ok then, …right now I’m listening to Lee Scratch Perry! I love all genres of music, and as I live in Brixton which is the Jamaican part of London (the best) reggae is generally the soundtrack for this area here. It’s so laid back here that you cannot help put it on.

Who are some of your musical (or other) heroes/influences?

I have quiet a few, but main hero and influence is definitely Joe Strummer from The Clash. God the passion in his voice was just second to none. On stage he was like a dynamo …super charged! And yet off stage the same person, really passionate.

Via clips and photos I noticed there are many stickers that adorn your guitar and guitar case…what are a few of them? Do you have a special fondness for, or are any of them of particular significance to you worth mentioning?

Haaa haha yeah, they are all beer stickers from show I have played since starting this band, and a lot of them get scrapped off from my aggressive strumming style.
After every show I usually take a label off a bottle and stick it on my guitar. The Sailor Jerry’s sticker makes me laugh every time I think about it. Drunken Balordi were in Norway and it was after we played The Roots Festival and the crazy chef who was looking after all the artists came backstage with a bottle of this whiskey and a bucket of ice ..ranting on about how much he enjoyed our show and saying that if I didn’t drink the bottle with him immediately that he was going to urinate in the artists food the following night! So I had to oblige..what ya gonna do eh?

If you weren’t a musician, what creative outlet do you think you would gravitate toward for most of your output? (And on that note, are there any other creative endeavors you engage in?)

Honestly, I cannot imagine my life without performing music, and entertaining people, I think I would die? Probably be a painter or sculpture, I went to art college for a year but got pissed off been told hold to draw they way they thought I should draw etc ..so I left! Haha hah

In 20 single-word adjectives or less: who is Billy King?

Ha ha ha ha .. I have to say, I could not have put it better myself!!! Thank you Tom

I know you’ve been busy, what are Drunken Balordi up to these days?

Drunken Balordi will be having their ‘official’ Debut album release party at the famous punk venue The 100 CLUB on Oxford Street in London this summer 2010. We are lookingat options for distribution deals for the album if anyone can help with that. We have quite a few festival shows lined up for this summer see www.drunkenbalordi.com

We will more than likely be back in NYC this year after recently meeting up with Gogol Bordello in London before their show at the Apollo Hammersmith, and they spoke about Drunken Balordi performing at the NYC world music Festival. So hopefully see you again this year! Opppppppppppaaaaaa. We have also a few European shows in the pipeline Prague/Amsterdam/Sweden and we would love to play Germany.

Drunken Balordi have also just been asked to play StrummerCamp festival this summer in Manchester. That’s a great honour for me!

Finally, I have to ask because this is (as of this writing) officially going to become the question I ask everyone: If you had a super power, what would it be? And, what would your super hero name be?

To make everyone happy with my music regardless of how serious their problems are, to make them feel that they are amongst friends & they can always come see us and forget everything else!

Ha haha, ‘Billy The Kid’ …the list is endless!

Huge thanks go out to Billy for allowing himself to be interrogated. To hear more and to keep up with their goings on you can visit the Drunken Balordi site, and you can also stop by the Strummerville DIY Drunken Balordi page for a free download of “Brixton Sun.”

Drunken Balordi Jam on a Roof Top in Rome